History of the Eastbrook Mission Barn

In 2000, the congregation of Eastbrook United Methodist Church was directed to purchase a new parsonage after the District Committee on Church Building and Location denied the church’s request to construct an addition to the church.  Reluctantly, the accumulated money was spent to purchase a remodeled farmhouse adjacent to the present Mission Barn.  The original purchase did not involve the barn and five acres of field, but the seller offered these to the church for the sum of $20,000 in 2001. Thus, without plan or design, Eastbrook UMC became the owners of a large former dairy.  Miracle #1: the church obtained an inexpensive, yet usable barn – with no idea how to use it.

For several years the congregation attempted to find a use for the barn – investigating ways to use it for youth recreation activities, education, etc.  Because of the difficulty in heating the large open spaces, these ideas all fell through.  In 2004, Rev. Nelson and Linda Thayer were appointed to Eastbrook UMC and began to speculate about the possibilities of using the barn for mission.  Miracle #2: a “critical mass” of leadership converged on Eastbrook at the same time.  The Thayers were appointed to Eastbrook UMC, Diane Miller (Conference Director of Volunteers in Ministry/ Mission) arrived in nearby New Castle when her pastor-husband was appointed there, and Rev. Rick Nelson (Conference Disaster Response Coordinator) was appointed to the nearby White Chapel UMC.

On arrival, the Thayers were aware of a need for heated storage for the UMCOR Cleaning Buckets collected within the Western PA annual conference.  But before this usage could materialize, Diane Miller approached Eastbrook UMC about developing a “Modular Ramp” project, based on the designs of the NE Jurisdiction VIM coordinator, Greg Forrester.  This Modular Ramp Project was formed in May 2008, to employ the excess volunteers who had signed up to build the WPA UMC-sponsored Habitat for Humanity House in Mercer, PA.  Miracle #3: with three weeks notice, the Mission Barn was able to apply for and receive a $12,000 grant for tools and building materials to use in constructing modular ramps!  The Modular Ramp Project continues to be an important part of the Mission Barn’s ministry.  Each year, youth from the Conference Cooperative School of Christian Mission (Mission Discovery) build ramp modules and install them at needy persons’ homes.

During the winter of 2008, Cleaning Buckets were stored in the barn in the heated office complex of the old dairy.  Very quickly, it became apparent that the WPA Conference needed a place to store other UMCOR kits besides the Cleaning Buckets, as well as a place to sort, process and ship these to other UMCOR facilities.  By 2009, construction of a heated 22’x48′ “Verification Room” had begun; a Board of Directors was recruited; the Mission Barn became a “HUB” of Mission Central in Mechanicsburg, PA; and all UMCOR materials collected at annual conference were channeled to the Eastbrook Mission Barn.  Miracle #4: with very little formal organization or foresight, several funding agencies offered the Mission Barn grant money to develop its ministries (approximately $40,000).  In 2010, a formal agreement with UMCOR – Sager Brown Depot was signed, superseding the “HUB” agreement with Mission Central.  Eastbrook Mission Barn had now become a member of the “UMCOR Relief Supply Network”, making it one of five depots nation-wide that collect, process, and ship materials to the two “official” UMCOR Depots located in Louisiana and Salt Lake City, Utah.

On January 14, 2010 a major earthquake struck Haiti, and the United Methodist churches of Western Pennsylvania surged into action.  The Eastbrook Mission Barn suddenly found itself at the center of a major disaster response: receiving, processing, and shipping over 45,000 UMCOR kits.  Volunteers from WPA UM churches came to the Mission Barn by the hundreds, logging well over 7,000 volunteer hours in 2010.  Before long, this less-than-two-year-old ministry was well known by nearly all of the 860 WPA UM churches that send their UMCOR kits and supplies to the Mission Barn.  Several newspaper articles highlighted the Mission Barn’s ministry to recovering addicts and mentally challenged adults – persons who volunteer regularly in UMCOR kit processing.  Combined with its membership in the UMCOR Relief Supply Network, this notoriety propelled the Mission Barn closer toward UMCOR’s goal of developing this ministry into a regional depot.  Miracle #5: God used the Eastbrook Mission Barn to enhance the organized and rapid response of a wide variety of people to the Haiti disaster.

The Mission Barn constructed a concrete loading dock and upgrading the access road to accommodate 53′ long-haul trailers.  Upgrades to our hospitality and storage capability have also been made by building indoor handicap-accessible toilet, a snack area, and additional heated storage space. The Eastbrook Mission Barn is a  fully operational year-round facility, serving the tri-state area as an UMCOR Depot.  Miracle #6: God continues to work with a little country church and a band of committed volunteers to help people in a disaster that hasn’t even happened yet!

In late 2016, Rev. Nelson and Linda Thayer officially retired from full time ministry through the barn and the community.  The Mission barn board and WPA conference applied and now have a full time director, Katie Peterson, who is Deaconess and Church and Community Worker Missionary through the General Board of Global Ministries and the United Methodist Women. 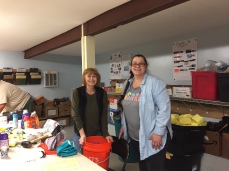 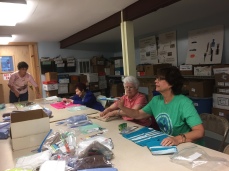